I’m pleased to announce that today’s guest author is Intisar Khanani, fantasy writer and author of Thorn, The Sunbolt Chronicles and short story The Bone Knife which you can read for free on Kindle! 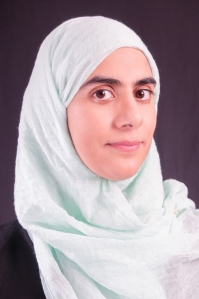 Intisar Khanani grew up a nomad and world traveler. She has lived in five different states as well as in Jeddah on the coast of the Red Sea. Until recently, Intisar wrote grants and developed projects to address community health with the Cincinnati Health Department, which was as close as she could get to saving the world. Now she focuses her time on her two passions: raising her family and writing fantasy. Intisar’s current projects include a companion trilogy to her debut novel, Thorn, featuring the heroine introduced in her free short story The Bone Knife, and The Sunbolt Chronicles. You can follow her on Twitter @BooksByIntisar. 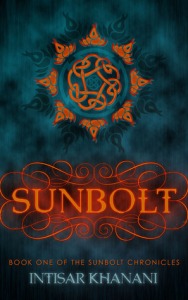 The winding streets and narrow alleys of Karolene hide many secrets, and Hitomi is one of them. Orphaned at a young age, Hitomi has learned to hide her magical aptitude and who her parents really were. Most of all, she must conceal her role in the Shadow League, an underground movement working to undermine the powerful and corrupt Archmage Wilhelm Blackflame.

When the League gets word that Blackflame intends to detain—and execute—a leading political family, Hitomi volunteers to help the family escape. But there are more secrets at play than Hitomi’s, and much worse fates than execution. When Hitomi finds herself captured along with her charges, it will take everything she can summon to escape with her life.

Salaam, Intisar! Thank you so much for joining us! As a fantasy author, can you tell us why you choose to write within this genre, and why you write for young adults?

IK: I suppose you could say YA fantasy chose me. From the moment I discovered it in my middle school library (I can still remember the cover of Robin McKinley’s Blue Sword), I knew I’d found what I wanted to read. While I’ve always made up stories, from that point on, my imaginings remained focused on secondary worlds populated with fabulous creatures, and young people coming into their own.

I love YA for the simple reason that young adults are in an amazing phase in their life—they are asking hard questions, grappling with deep issues, deciding what they think of authority and justice and so many different things, and their reads reflect that. They are also full of hope—YA stories rarely ends in the slow decline into alcoholism and death of the hero, or the tragic suicide of the heroine, because that’s apparently what adults find enjoyable. (Don’t ask me, I’m claiming honorary YA status on this one.)

Fantasy also allows us to step out of our own world—and that lets us challenge our own biases, the status quo, the way we are used to thinking about the world. In a secondary world, we’re safe. We can play with serious questions and then step back into the real world without feeling like we’ve done anything too crazy… but we take what we’ve read with us. Books stick with us, which is what makes fantasy awesomely subversive and powerful. Nuff said.

What approach do you take towards world-building? What advice would you give to anyone wanting to create a fantasy world?

IK: My worlds usually start based in the real world. I take time to research real-world historical cultures, usually of places that I’ve been too and have some point of reference for. I read mythologies to decide on the fantastical creatures that will show up. I read folk tales to ground me and the fantastic further. And I look for sensitivity readers who can assess my representation of that culture once the book is written.

My goal in creating my secondary worlds is to write a world that reflects the real world, which includes many cultures, races, and ethnicities, not all reflected in the existence of dwarves and dark elves (that argument makes me want to shout). This isn’t easy or simple, but the payoff is to have a world that feels real in its diversity.

My advice? Don’t take the easy way out. Push yourself, challenge your assumptions and stereotypes as you work, and make a world you can be proud of. Your world will influence your story and vice verse. The richer your world, the richer your story.

The world of Sunbolt is swarming with magical creatures. In an alternate universe, which creature would you be and why?

IK: Oh, that’s a hard one! Part of me would just be super excited to be me in an alternate universe swarming with magical creatures. But if I had to choose, I’d probably opt for being a dragon. I mean, breathes fire, top of the food chain, and wings to boot—what’s not to love?

Where did the idea for Hitomi’s story come from? Were any of the characters or locations inspired by real-life people and places?

IK: I wrote the first chapter or so of Sunbolt as a short story that ended rather abruptly because I couldn’t figure out what the ending actually was. I wasn’t even sure what the story was about, so I gave it the working title of “Night Story” (since most of it took place at night) and left it at that. It sat quietly on my laptop for a long time, perhaps a couple years. Every now and then I would come back to it, scratch my head, make a few attempts to figure it out, and leave it alone again. Then, while traveling overseas to be with my in-laws during a family illness, the first three installments of the Chronicles came pouring out of me.

Then I left it alone again for nearly three years, while I polished up my debut novel to release and worked on other projects. When I came back to my draft, I knew this was a project I wanted to complete and publish. So I started revising and developing the storyline further. The funny part? Not a single scene from the original beginning that I wrote and pondered over is left. Bit by bit, it got chipped away, re-visioned, and rewritten.

As for locations, the island sultanate that is Hitomi’s adoptive home is based on historic Zanzibar. I had the opportunity to visit Stone Town in 2004, and the sights and sounds stayed with me, showing up three years later when I finally wrote the story itself. In the sequel, Memories of Ash, Hitomi starts out in a mountain range not unlike the Himalayas, and travels to a city based on Ottoman Istanbul—in fact, the Festival of the Guilds is pulled right from the pages of a first-hand account of the same annual celebration that once took place there.

Finally, can you tell us a little bit about your future endeavours? What are you working on right now?

IK: Right now I’m working on the third book in The Sunbolt Chronicles (I have four planned overall). Once this draft is done, I’m hoping to switch gears to work on a companion novel to my debut novel, Thorn (a retelling of the Grimms’ tale “The Goose Girl”). The companion story features a new heroine, Rae, who was introduced in my free short story, The Bone Knife.

Thank you so much for your time! It’s been a pleasure talking to you!

Catch up on the first two books in The Sunbolt Chronicles – Order Sunbolt and Memories Of Ash on Amazon UK or Book Depository.