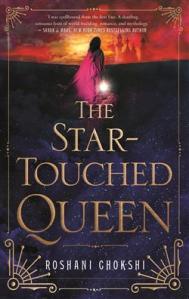 Fate and fortune. Power and passion. What does it take to be the queen of a kingdom when you’re only seventeen?

Maya is cursed. With a horoscope that promises a marriage of death and destruction, she has earned only the scorn and fear of her father’s kingdom. Content to follow more scholarly pursuits, her whole world is torn apart when her father, the Raja, arranges a wedding of political convenience to quell outside rebellions. Soon Maya becomes the queen of Akaran and wife of Amar. Neither roles are what she expected: As Akaran’s queen, she finds her voice and power. As Amar’s wife, she finds something else entirely: Compassion. Protection. Desire…

But Akaran has its own secrets—thousands of locked doors, gardens of glass, and a tree that bears memories instead of fruit. Soon, Maya suspects her life is in danger. Yet who, besides her husband, can she trust? With the fate of the human and Otherworldly realms hanging in the balance, Maya must unravel an ancient mystery that spans reincarnated lives to save those she loves the most…including herself.

I have been looking forward to The Star-Touched Queen for such a long time. Inspired by Indian mythology, I don’t think I’ve ever read fantasy with South-Asian influences so this was definitely something that appealed to me. Not to mention, the cover is stunning. I did not for one second doubt that it would be worth the hype. But, you know what they say. With great anticipation comes huge disappointment.

Let’s start with the positives! The writing is gorgeous. It’s that kind of lyrical style that is so captivating even though you have no idea what some of the metaphors mean. But, that being said, I’m not sure this style of prose works for a first person narrative. Maya is only seventeen years old, and it’s really hard to connect with a character whose voice is so poetic all of the time. I can handle the occasional sentence because those are the lines I usually end up quoting in my review, but despite Chokshi’s beautiful style there was nothing that really stood out for me.

When it seems like so much effort went into crafting these perfectly poetic sentences, it’s no surprise that I literally had no idea what was going on in the story. It really lacked in terms of world-building and I struggled to grasp the setting in terms of the different realms and how the tapestry ties them all together. That, along with the sluggish pacing and rushed scenes (yes, it was both fast and slow at the same time!) just left me feeling confused.

There weren’t a lot of characters which can often be a positive because development? but even then I don’t know how some characters i.e. Nritti actually fit into the story. Amar was basically creepy and boring and I can’t fathom why Maya would marry a complete stranger, or how any of their interactions where even the slightest bit romantic. Even after the big revelation, it didn’t make any sense.

Which brings me to the plot. Something I’d be able to talk about if it actually existed. The only major plot point was Maya’s (other) reckless decision, and things still didn’t make much sense in the second half of the book. It really says something when you find yourself rooting for the talking horse more than the protagonist.

Overall, I really wanted to love this but my expectations far exceeded the reality. I didn’t enjoy the world, or the plot, or the characters (apart from Gauri?) which is a shame. I don’t think I’ll be reading the companion novel but I’m not ruling out any of the author’s future works.