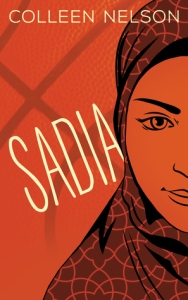 Fifteen-year-old Sadia Ahmadi is passionate about one thing: basketball. Her best friend Mariam, on the other hand, wants to get noticed by the popular crowd and has started de-jabbing, removing her hijab, at school every morning. Sadia’s mom had warned her that navigating high school could be tricky. As much as she hates to admit it, her mom was right.

When tryouts for an elite basketball team are announced, Sadia jumps at the opportunity. Her talent speaks for itself. Her head scarf, on the other hand, is a problem; especially when a discriminatory rule means she has to choose between removing her hijab and not playing. Mariam, Sadia’s parents, and her teammates all have different opinions about what she should do. But it is Sadia who has to find the courage to stand up for herself and fight for what is right — on and off the court.

Thank you to the publisher and NetGalley for providing me with an advance reading copy in exchange for an honest review!

Despite my initial excitement about seeing a hijabi on the cover of a book about a teenage Muslim basketball player, I was always very conscious of the fact that Sadia is written by a non-Muslim author. And it doesn’t just focus on one Muslim character, which meant 1) there was a lot that could have gone wrong and 2) there was a lot that actually did.

Though the characters here are in ninth grade, the novel read like it was targeted at a much younger audience – not quite middle grade but not quite young adult either. The opening was incredibly descriptive, where the appearance and character of every student in Sadia’s class was defined. We find out that Sadia is Syrian, Nazreen is Egyptian and Carmina is Filipino, but we rarely hear of how this affects their experiences as minority teenagers in Canada. The multiplicity of personalities in their Global Studies class (the only class they attend in the entire book!) was, however, well presented. I also enjoyed the exploration of social issues through Mr Letner’s ‘If You Give A Kid A Camera’ project, with the additional passion projects really capturing the message of hopefulness which I believe the novel was trying to portray.

“I HATE THAT THERE AREN’T ANY BOOKS WITH CHARACTERS WHO LOOK LIKE ME.”

The basketball element was also one I really enjoyed. With the likes of Ibtihaj Muhammad paving the way for hijab-wearing Muslim women in the real-life sporting world, it was refreshing to read about Sadia, her passion for basketball and her parents’ support in her decision to play.

However, whilst it’s important to acknowledge and address the rules and regulations that may deny Muslim women from playing sports in hijab, I wanted to read a book about a hijabi basketball player where the emphasis wasn’t on how the headscarf hindered her performance. Before the tournament discrimination even comes into play, Sadia frequently considers how much easier it would be to play the game without hijab. At one point, the loose end of her headscarf shoots up and obscures her vision, resulting in an elbow to her face and I just can’t even comprehend this happening. Sure, hijab can present itself as a safety issue in many scenarios but it doesn’t render you blind unless you accidentally stab your eyes with the pins that hold it in place.

Furthermore, Sadia and Nazreen’s friendship appears to be heavily dependent on both girls wearing hijab since Sadia strongly believes Nazreen’s ‘de-jabbing’ is the reason they’re drifting apart. The book relies on many problematic and stereotypical views of hijab that can only stem from someone who’s never worn one. The author tries to depict hijab as a choice through Sadia’s conflicted opinion on whether or not to remove hers, yet she also implies that it was a decision made by Sadia’s parents on her behalf: “Mom and Dad had agreed I’d start wearing hijab when I turned 13.” Furthermore, Sadia’s failed attempts at convincing Nazreen to reconsider ‘de-jabbing’ result in even more problematic ideologies: “I wasn’t her parent. It wasn’t up to me to force modesty on her.” At this point, I wasn’t sure what the author was trying to do or say as it felt incredibly contradictory.

The plot of the book was also lacking. To sum it up: a group of students take a class with a teacher and then that same teacher coaches that same group of students to play basketball at lunchtime. Eventually, they compete in a tournament where a chorus of “Let her play!” (which was heart-warming) easily overrides the discriminatory rules that prevent Sadia from competing in her hijab (which was unrealistic.)

“KIND OF IRONIC THAT THE THING THEY FOUGHT FOR WAS THE SAME THING THAT WOULD KEEP ME FROM CELEBRATING WITH THEM.”

Overall, this book was disappointing, and somewhat messy. It equates hijab with being Muslim, which is definitely not the case. And it equates hijab to maintaining friendships, which could not be further from the truth. There are some good elements, but there are also other elements – such as Amira’s arrival as a Syrian refugee – that could have been explored much further. Ultimately, despite the research the author may have put into writing this book, there is so much more that needed to be done.