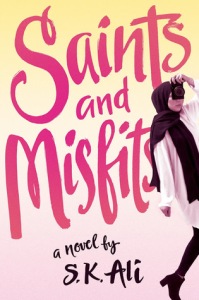 There are three kinds of people in my world:

1. Saints, those special people moving the world forward. Sometimes you glaze over them. Or, at least, I do. They’re in your face so much, you can’t see them, like how you can’t see your nose.

2. Misfits, people who don’t belong. Like me—the way I don’t fit into Dad’s brand-new family or in the leftover one composed of Mom and my older brother, Mama’s-Boy-Muhammad.

Also, there’s Jeremy and me. Misfits. Because although, alliteratively speaking, Janna and Jeremy sound good together, we don’t go together. Same planet, different worlds.

People think he’s holy, untouchable, but nobody has seen under the mask.

Saints and Misfits is the YA Muslim contemporary I’ve always wanted to read. The novel is narrated by Janna Yusuf, a fifteen year old Arab-Indian American who is just trying to navigate her life whilst dealing with a traumatic experience inflicted by the hands of someone in her own community.

Too often, authors who write a Muslim protagonist tend to avoid exploring the Muslim-ness of their characters, but Sajidah Ali does this very explicitly. I loved the integration of religion in the story without feeling like it was preaching. From Janna’s graphic novel on the Prophet’s life and teachings to her uncle’s ‘Ask Imam’ advice forum and the exploration of Islam in the Fun Fun Fun Islamic Quiz game, there is a lot to be learnt by both non-Muslims and Muslims alike. I also enjoyed the portrayal of a Muslim community that isn’t monolithic, with each of the characters adopting varying degrees of religiousness.

The book is relatively fast-paced, introducing all the characters within the first few pages, but it does appear to brush off the seriousness of the sensitive topic it deals with through its hasty conclusion. Though the subject matter can be quite heavy at times – with instances of Janna reliving her assault through Farooq’s relentless harassment – it was the cast of characters that really contributed to my enjoyment of the novel. The brother-sister relationship between Janna and Muhammad is one I adored, not to mention the sweet Nuah, Saint Sarah, the fierce Sausun and Mr Ram. I really didn’t care for Janna’s obsession with Jeremy or his forehead, but I think the way the author explores the good and the bad Muslim through Farooq is commendable.

Overall, I really enjoyed this book. There are multiple plots that don’t really connect like pieces of the same jigsaw puzzle, but it delivers on Muslim representation (without any mention of terrorism!) and boasts a diverse set of characters you can really root for. Not without its faults but one I wouldn’t hesitate to recommend.

One thought on “Book Review | Saints And Misfits By S. K. Ali”