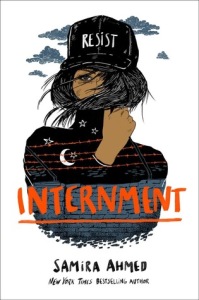 Rebellions are built on hope.

Set in a horrifying near-future United States, seventeen-year-old Layla Amin and her parents are forced into an internment camp for Muslim American citizens.

With the help of newly made friends also trapped within the internment camp, her boyfriend on the outside, and an unexpected alliance, Layla begins a journey to fight for freedom, leading a revolution against the internment camp’s Director and his guards.

Thank you to the publisher for providing me with an advance reading copy in exchange for an honest review!

It’s needless to say that Internment is one of the most politically-urgent and timely novels of 2019, imagining a near-future United States where Muslims are forced into internment camps on the basis of their faith. This was one of the longest contemporary novels I’ve ever read and, yet, it still felt too short; I completely devoured it despite telling myself I would take my time because of how heavy it was and, upon finishing it, I felt like there was a lot more that still needed to be said. But I strongly believe those conversations need to happen outside of these pages and that, even though the book feels largely unfinished, its sole purpose here is to initiate necessary dialogues in the political climate we are currently living in.

By the time the book is published in March 2019, the narrative timeline – set two and a half years after the presidential election – will mirror that of reality, and we can only hope that the horrific events within the novel won’t transpire in the same way. But the truth is, the events of Internment aren’t fictional by any means; they are already happening and they are already a reality for many Muslims, if not in the United States then in East Turkestan and Myanmar and Palestine, to name a few.

Despite its shortcomings, this novel is hard hitting from start to finish, with multiple references to the real-life events – both past and present – that gave birth to Layla’s story. Regardless of her many questionable decisions and equally reckless actions, it was Layla’s internal dialogues and thoughts that resonated the most. How living a life of constant fear – under extreme surveillance – should never be classed as living. And the endless struggle of holding on to a faith that has been criminalised; to stay true to who you are despite knowing what happened to Nabra Hassanan and to Deah Barakat, Yusor and Razan Abu-Salha in Chapel Hill; despite having our sacred spaces vandalised and feeling threatened in our safest spaces – our own homes – by flyers that view these Islamophobic attacks as a mere game, equating our lives to nothing more than another kill. Our lives are too often reduced down to statistics; our names erased and replaced by numbers. So, in the book, the concept of being identified by a unique barcode – that is only visible under UV light – didn’t seem that far-fetched.

Samira Ahmed’s writing is just how I remember it from her debut novel – simple yet sophisticated – and it actually works here despite the book engaging with more difficult and complex themes. There were so many small things which I loved, like the incorporation of poetry and how it was used to describe a specific verse within the Qur’an, capturing how the Arabic language is just that – lyrical and comforting – despite how the media wants us to perceive it. I really appreciated the different aspects of religion that were discussed, like they were many threads of the same tapestry. Layla, for example, doesn’t wear the hijab and even admits that she isn’t the most devout Muslim, but it’s made clear how hijab is a personal choice and how faith is between you and your God alone. Furthermore, although I wasn’t keen on the romantic storyline, I really enjoyed getting to see both an interracial and interfaith relationship between Layla and her boyfriend, David, who is Jewish.

This book really nails all the different power dynamics that exist within our societies, from a detail as small as capitalising Director and Exclusion Guards to the way silence is used to assert dominance in discourse. It highlights how there is a hierarchy for bigots; how their bigotry is often a product of both racism and Islamophobia, with Black Muslims facing the worst consequences. In particular, by dividing the families at Mobius into their ethnic groups, the book was also able to delve into the internalised prejudices Muslims have against each other and those who do not belong to their cultural communities.

Overall, Internment is a lot closer to reality than it is fiction, taking events that are deeply rooted in history and uncovering how we are bearing witness to them now, again, in the present. From Manzanar and the Holocaust to the Muslim Ban and internment camps for refugees. From the White Rose resistance to the movements led by the youth of Standing Rock and the March For Our Lives. History has a tendency to repeat itself, but we are resisting.

Internment teaches us the power of solidarity and how we can all learn something from our youth. It teaches us to fight the complicit silence because the generations of tomorrow will be shaped by our actions today. But my favourite lesson most definitely comes in the concluding note of the novel, where Samira Ahmed shares the gentle reminder that “speaking your truth and voicing your resistance can happen in quiet ways too.”