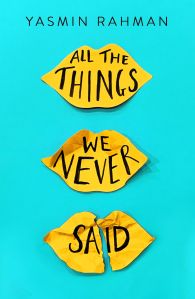 Title: All The Things We Never Said

16-year-old Mehreen Miah’s anxiety and depression, or ‘Chaos’, as she calls it, has taken over her life, to the point where she can’t bear it any more. So she joins MementoMori, a website that matches people with partners and allocates them a date and method of death, ‘the pact’. Mehreen is paired with Cara Saunders and Olivia Castleton, two strangers dealing with their own serious issues.

As they secretly meet over the coming days, Mehreen develops a strong bond with Cara and Olivia, the only people who seem to understand what she’s going through. But ironically, the thing that brought them together to commit suicide has also created a mutually supportive friendship that makes them realise that, with the right help, life is worth living. It’s not long before all three want out of the pact. But in a terrifying twist of fate, the website won’t let them stop, and an increasingly sinister game begins, with MementoMori playing the girls off against each other.

A pact is a pact, after all.

Thank you to the publisher and NetGalley for providing me with an advance reading copy in exchange for an honest review!

All The Things We Never Said is an extremely dark story about three girls – Mehreen, Cara and Olivia – that shines a light on the power of friendship. Although the story is narrated in multiple perspectives, Mehreen ultimately feels like the main protagonist of the novel and, unsurprisingly, it was Mehreen’s character that I related to the most.

More than anything, I loved her unwavering relationship with her faith. The novel begins with her standing in prayer and really captures how peaceful the act is for many Muslims. This feeling of tranquillity juxtaposed with Mehreen’s Chaos was a particularly powerful image. I also loved the conflict she faced in justifying suicide when it goes against the teachings of Islam.

Through the three perspectives, the author manages to convey how mental health issues can affect anyone and everyone regardless of whether they have a reason. It often feels like we, as a society, focus too much on the why something is rather than how we can help. Unlike Cara and Olivia, who have both been through traumatic experiences, Mehreen’s Chaos isn’t induced by trauma. But that doesn’t mean she’s struggling any less than the others. In fact, all three girls are brought together by MementoMori because they collectively feel the same way despite how varied their backgrounds and experiences.

The author also does well to keep each voice distinct from the other, with Mehreen’s Chaos scribbled onto the page, Cara’s use of profanity and Olivia’s chapters written in verse. This being said, Mehreen and Cara’s voices sometimes felt too similar when they were sharing scenes to the point where I forgot whose perspective I was reading. Without the profanity or Chaos, they would feel almost the same which makes Olivia’s short and poetic chapters feel incredibly out of place in the story.

However, I did really love the way Olivia’s character was written. From an outside perspective, Mehreen and Cara observe how Olivia isn’t someone who looks depressed. She’s incredibly chirpy for someone who makes a suicide pact with two strangers she hardly knows. But on the inside, when we read from her point of view, we see a completely different story. This, for me, was one of the most important aspects of the novel, stressing that you really don’t know what someone else is going through.

Until you talk to them. And talking, as the novel ultimately shows, can make all the difference. Despite their disagreements, it was heart-warming to see the girls find common ground in order to be there for each other. What started as a fake support group turns into something real and special – friendship. And it’s not just about the importance of talking to strangers but also to your family and your therapist.

Overall, I knew I was going to relate to this novel on many levels. Sometimes representation is something as small as a samosa production line. And other times, it’s feeling completely seen and heard by the visual depiction of mental health issues on the page. This book delivers on both of them.