AYESHA AT LAST BY UZMA JALALUDDIN

AYESHA SHAMSI has a lot going on. Her dreams of being a poet have been set aside for a teaching job so she can pay off her debts to her wealthy uncle. She lives with her boisterous Muslim family and is always being reminded that her flighty younger cousin, Hafsa, is close to rejecting her one hundredth marriage proposal. Though Ayesha is lonely, she doesn’t want an arranged marriage. Then she meets Khalid who is just as smart and handsome as he is conservative and judgmental. She is irritatingly attracted to someone who looks down on her choices and dresses like he belongs in the seventh century.

When a surprise engagement between Khalid and Hafsa is announced, Ayesha is torn between how she feels about the straightforward Khalid and his family; and the truth she realizes about herself. But Khalid is also wrestling with what he believes and what he wants. And he just can’t get this beautiful, outspoken woman out of his mind.

This is a Muslim Pride and Prejudice retelling and, even though I’m not really into romance books, doesn’t it sound amazing?

Ayesha At Last will be published in Canada on June 12th 2018 and (unfortunately!) elsewhere in 2019. In the meantime, here are some other books you can read by Muslim authors which are being published in May – June. For an extensive but non-exhaustive list of titles still to publish this year and the next, you can check out this post. 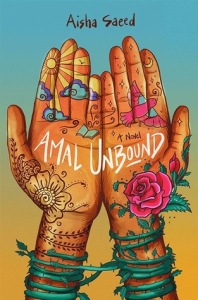 Life is quiet and ordinary in Amal’s Pakistani village, but she had no complaints, and besides, she’s busy pursuing her dream of becoming a teacher one day. Her dreams are temporarily dashed when–as the eldest daughter–she must stay home from school to take care of her siblings. Amal is upset, but she doesn’t lose hope and finds ways to continue learning. Then the unimaginable happens–after an accidental run-in with the son of her village’s corrupt landlord, Amal must work as his family’s servant to pay off her own family’s debt.

Life at the opulent Khan estate is full of heartbreak and struggle for Amal–especially when she inadvertently makes an enemy of a girl named Nabila. Most troubling, though, is Amal’s growing awareness of the Khans’ nefarious dealings. When it becomes clear just how far they will go to protect their interests, Amal realizes she will have to find a way to work with others if they are ever to exact change in a cruel status quo, and if Amal is ever to achieve her dreams.

The summer after her freshman year in college, Mariam is looking forward to working and hanging out with her best friends: irrepressible and beautiful Ghazala and religious but closeted Umar. But when a scandalous photo of Ghaz appears on a billboard in Times Square, Mariam and Umar come up with a plan to rescue her from her furious parents. And what better escape than New Orleans?

The friends pile into Umar’s car and start driving south, making all kinds of pit stops along the way–from a college drag party to a Muslim convention, from alarming encounters at roadside diners to honky-tonks and barbeque joints.

Along with the adventures, the fun banter, and the gas station junk food, the friends have some hard questions to answer on the road. With her uncle’s address in her pocket, Mariam hopes to learn the truth about her father (and to make sure she didn’t inherit his talent for disappearing). But as each mile of the road trip brings them closer to their own truths, they know they can rely on each other, and laughter, to get them through.

A REAPER AT THE GATES BY SABAA TAHIR (EMBER QUARTET #3)

Beyond the Empire and within it, the threat of war looms ever larger.

The Blood Shrike, Helene Aquilla, is assailed on all sides. Emperor Marcus, haunted by his past, grows increasingly unstable, while the Commandant capitalizes on his madness to bolster her own power. As Helene searches for a way to hold back the approaching darkness, her sister’s life and the lives of all those in the Empire hang in the balance.

Far to the east, Laia of Serra knows the fate of the world lies not in the machinations of the Martial court, but in stopping the Nightbringer. But while hunting for a way to bring him down, Laia faces unexpected threats from those she hoped would aid her, and is drawn into a battle she never thought she’d have to fight.

And in the land between the living and the dead, Elias Veturius has given up his freedom to serve as Soul Catcher. But in doing so, he has vowed himself to an ancient power that will stop at nothing to ensure Elias’s devotion–even at the cost of his humanity.

NOT THE GIRLS YOU’RE LOOKING FOR BY AMINAH MAE SAFI 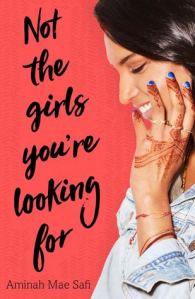 Lulu Saad doesn’t need your advice, thank you very much. She’s got her three best friends and nothing can stop her from conquering the known world. Sure, for half a minute she thought she’d nearly drowned a cute guy at a party, but he was totally faking it. And fine, yes, she caused a scene during Ramadan. It’s all under control. Ish.

Except maybe this time she’s done a little more damage than she realizes. And if Lulu can’t find her way out of this mess soon, she’ll have to do more than repair friendships, family alliances, and wet clothing. She’ll have to go looking for herself.

Which of these books are you most excited for? The next stop on the #RamadanReadathon blog tour is Breeny’s Books! Head over to her blog on May 19th to find out which book lurks behind door #2!