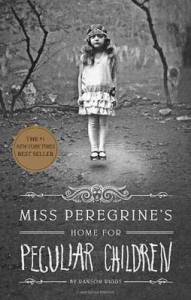 A mysterious island. An abandoned orphanage. A strange collection of curious photographs.

A horrific family tragedy sets sixteen-year-old Jacob journeying to a remote island off the coast of Wales, where he discovers the crumbling ruins of Miss Peregrine’s Home for Peculiar Children. As Jacob explores its abandoned bedrooms and hallways, it becomes clear that the children were more than just peculiar. They may have been dangerous. They may have been quarantined on a deserted island for good reason. And somehow—impossible though it seems—they may still be alive.

Miss Peregrine’s Home For Peculiar Children is a clever piece of writing. Inspired by vintage snapshots that are interspersed throughout the book to accompany the narrative, it’s most certainly not your average reading experience. It’s also hard to pinpoint the exact genre, but I would say it’s a cross between fantasy – because of the peculiar children – and historical fiction, with part of the novel set in WWII.

I actually really enjoyed the setting of the book, but then again I’m biased (you probably shouldn’t listen to someone who justified buying it because it said ‘a remote island off the coast of Wales’ on the back cover.) Still, the mysterious island gives it that creepy vibe which remains for most of the novel. It’s not at all scary; it’s just creepy.

Unfortunately, the characters were pretty bland and one-dimensional. You don’t learn much about the peculiar children aside from their peculiarities and I didn’t particularly care for the protagonist, Jacob. There’s a romance sub-plot that made me really uncomfortable, invoking the same feelings I experienced when watching The Age Of Adaline. I haven’t read or watched nearly enough time-manipulation narratives to truly back up my statement but this is one romance trope that literally needs to die.

There are some interesting twists near the end of the novel and it does manage to pick up after the slow start but, for me, this book reads as a standalone. I’m not invested enough to finish the trilogy, despite it ending on a cliff-hanger of sorts. Literally, the only reason I would pick up the others is for the writing style.